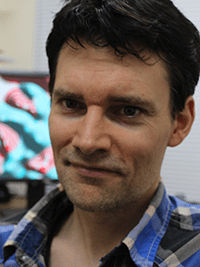 To learn how cognition is implemented in the brain, we must build computational models that can perform cognitive tasks, and test such models with brain and behavioral experiments [1]. Modern technologies enable us to measure and manipulate brain activity in unprecedentedly rich ways in animals and humans. However, experiments will yield theoretical insight only when employed to test brain-computational models. Recent advances in neural network modelling have enabled major strides in computer vision and other artificial intelligence applications. This brain-inspired technology provides the basis for tomorrow’s computational neuroscience [1, 2]. Deep convolutional neural nets trained for visual object recognition have internal representational spaces remarkably similar to those of the human and monkey ventral visual pathway [3]. Functional imaging and invasive neuronal recording provide rich brain-activity measurements in humans and animals, but a challenge is to leverage such data to gain insight into the brain’s computational mechanisms [4, 5]. We build neural network models of primate vision, inspired by biology and guided by engineering considerations [2, 6]. We also develop statistical inference techniques that enable us to adjudicate between complex brain-computational models on the basis of brain and behavioral data [4, 5]. I will discuss recent work extending deep convolutional feedforward vision models by adding recurrent signal flow and stochasticity. These characteristics of biological neural networks may improve inferential performance and enable neural networks to more accurately represent their own uncertainty.

Nikolaus Kriegeskorte is a computational neuroscientist who studies how our brains enable us to see and understand the world around us. He received his PhD in Cognitive Neuroscience from Maastricht University, held postdoctoral positions at the Center for Magnetic Resonance Research at the University of Minnesota and the U.S. National Institute of Mental Health in Bethesda, and was a Programme Leader at the U.K. Medical Research Council Cognition and Brain Sciences Unit at the University of Cambridge. Kriegeskorte is a Professor at Columbia University, affiliated with the Departments of Psychology and Neuroscience. He is a Principal Investigator and Director of Cognitive Imaging at the Zuckerman Mind Brain Behavior Institute at Columbia University. Kriegeskorte is a co-founder of the conference “Cognitive Computational Neuroscience”, which had its inaugural meeting in September 2017 at Columbia University.