Many thanks to the generosity of the City of Helsinki for welcoming SNL attendees with an Opening Night Reception to be held in the exquisite Banquet Hall of the Helsinki City Hall. Following the first day’s sessions, join your colleagues for an an elegant evening of food, drinks and stimulating conversation. The reception will open with a Welcome Address from a City of Helsinki official, after which SNL attendees will enjoy a delicious salad bar buffet, wine and refreshments. We are excited to announce that entertainment during the reception will be provided by the acclaimed Philomela. Guests of registered SNL attendees are welcome to attend the reception!

All attendees and guests must present their invitations at the Banquet Hall door. Invitations to the reception will be distributed when attendees pick up their badges.

Philomela is an innovative and skilled female choir, ensemble and a polyphonic instrument known for its strong, memorable and spatial musical performances. Philomela commissions new music frequently and works with contemporary composers who take elements from Finnish folk tradition and creatively combine it with their own musical ideas. Philomela is founded and conducted with great passion by Marjukka Riihimäki, since 1984. Philomela shakes the traditions of choral singing and aims to surprise its audience in every concert. Movement is also an essential part of Philomela’s performance: the space is always a key element to present a multidimensional musical experience for the audience. Philomela’s unique musical expression has succeeded to touch audiences’ hearts all over the world across language and cultural barriers. Philomela has won Championship titles in the World Choir Games in 2014 and European Choir Games in 2013. 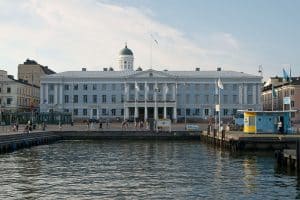 Helsinki City Hall, Helsingin Kaupungintalo, is the central administrative building of Helsinki, the capital of Finland. Located in the Kruununhaka district, City Hall features a beautiful white and blue façade in the imperial style and overlooks the bustling Market Square. Designed in 1833 by the famous German architect Carl Ludvig Engel, the building served as a cultural entertainment hotel until it was acquired by the city in 1913, renovated, and christened as the Helsinki City Hall in 1932. The interior was modernized the 1960’s, but the resplendent Banquet Hall has retained its elegant 19th century form. 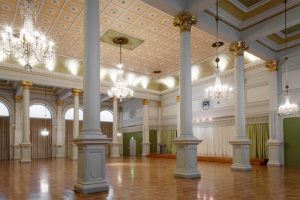 The walk from the Finlandia Hall to the Helsinki City Hall is 1.8 KM, about a 20 minute walk. You can also take tram 4 from Finlandia Hall to the beautiful Senate Square and then walk one block to the City Hall. For guests needing extra assistance getting to the event, please contact the SNL Registration Desk.