The Society for the Neurobiology of Language thanks the following companies for their support of our 2018 meeting. Please visit these sponsors during the 2018 meeting.

The 10th meeting of the Society for Neurobiology of Language is generously supported by the National Institutes of Health (R13 grant #DC011445). The NIH has been supporting SNL meetings by sponsoring travel grants to under-represented minorities, daycare services, sign language interpreting services and more, thus enhancing the accessibility of the meetings to various audiences. We are extremely grateful to the NIH for its generous support of SNL meetings over the years.

Rogue Research, developers of the Brainsight® family of neuronavigation products, has been providing neuroscience researchers with best in class tools for over 18 years. Brainsight TMS is used in more than 500 labs and is the most popular image-guided TMS system. Our new cTMS stimulator gives you more control over the pulse shape than any other TMS device available. Our Brainsight NIRS imaging system combines our navigator with our multi-modality friendly NIRS device for combined NIRS and EEG, EMG, MRI, MEG or tDCS.

An interdisciplinary journal, Brain & Language focuses on the neurobiological mechanisms underlying human language. The journal covers the large variety of modern techniques in cognitive neuroscience, including lesion-based approaches as well as functional and structural brain imaging, electrophysiology, cellular and molecular neurobiology, genetics, and computational modeling. All articles must relate to human language and be relevant to an elaboration of its neurobiological basis. Along with an emphasis on neurobiology, journal articles are expected to take into account relevant data and theoretical perspectives from psychology and linguistics. 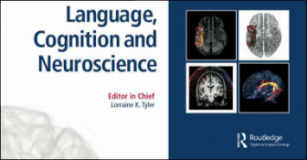 Founded in 2008, the QBIN is a provincial network of researchers, clinicians and students that promote and facilitate the development of high quality, innovative and collaborative research in the field of bioimaging in the province of Quebec. Funded by the “Fonds de la Recherche du Québec en Santé (FRQS)”, the QBIN’s mission is to support bioimaging research aimed at uncovering normal and pathological functioning in humans using human and animal models and through the development of innovative image acquisition techniques and advanced post-acquisition processing methods. The QBIN plays an important part in fostering bioimaging research in the province of Québec through various grant programs, student scholarships and support to scientific activities throughout the province including scientific talks, workshops and public lectures.

Université Laval, Office of the Vice Rector of Research and Innovation

Université Laval (UL) is the first French-language university in the Americas. Located in Québec City, UL hosts about 43,000 students each year, of which 25% are graduate students. UL is a carbon-neutral institution that is committed to sustainable development and contributing to community well-being. The UL Office of the Vice Rector of Research and Innovation bears executive responsibility for developing research and innovation activities and establishing general policies in matters of research and innovation. Finally, the Vice Rector sees to the sound management of intellectual property derived from the commercialization of university research.

Mrs. Hélène David, Minister responsible for Higher Education and for the Status of Women 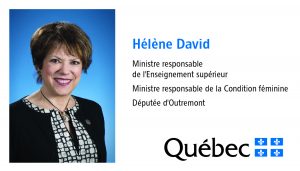 Québec’s parliamentary system, which is based on cooperation between the legislative body (Parliament) and the executive body (government), is modelled on the British Westminster parliamentary system. The Premier is the head of the political party with the most elected members after a general election. The Government is composed of several departments and agencies. The mission of the Ministère de l’enseignement supérieur, [higher education], headed by Mrs David, one of the Government’s most important department, under its constituting Act, is to carry out its activities in the areas of preschool, elementary and secondary school, college and university education, research, student financial assistance, and recreation and sports. Mrs. David is a member of the Québec Liberal party.