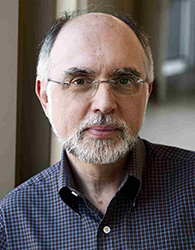 Our lab has focused on music as a powerful model for understanding plasticity in a human cognitive neuroscience context. This talk will present evidence that musical training modifies auditory and motor networks, and their functional and anatomical relationships, and that important asymmetries exist across the two hemispheres in these systems. We will also discuss evidence that individual differences in learning are related to functional features that may serve as predictors of later learning success. Our goal is to develop a better model of how the large-scale organization and asymmetries of auditory-motor networks relate to the experience-dependent plasticity that underlies complex skills such as playing a musical instrument, which may also have implications for speech.

Dr. Zatorre is a cognitive neuroscientist at the Montreal Neurological Institute of McGill University. His principal interests relate to the neural substrate for auditory cognition, with special emphasis on two complex and characteristically human abilities: speech and music. He and his collaborators have published over 280 scientific papers on a variety of topics including pitch perception, auditory imagery, auditory-motor integration, music and emotion, perception of auditory space, and brain plasticity in the blind and the deaf. In 2005 he was named holder of a James McGill chair in Neuroscience. In 2006 he became the founding co-director of the international laboratory for Brain, Music, and Sound research (BRAMS), a unique multi-university consortium with state-of-the art facilities dedicated to the cognitive neuroscience of music. In 2011 he was awarded the IPSEN foundation prize in neuronal plasticity, and in 2013 he won the Knowles prize in hearing research from Northwestern University. He lives in Montreal with his wife and collaborator Virginia Penhune, professor of psychology at Concordia University. He tries to keep up his baroque repertoire on the organ whenever he can get a chance.