The Society for the Neurobiology of Language is pleased to announce the 2019 Early Career Award winners: Jonathan Brennan and Vitória Piai.

The Early Career Awards are generously sponsored by Brain and Language. 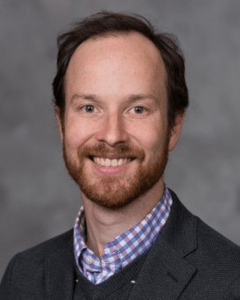 The cognitive neuroscience of language relies largely on controlled experiments that are different from the everyday situations in which we use language. I discuss an approach to studying specific aspects of sentence comprehension in the brain using data collected while participants perform an every-day task, such as listening to an audiobook story. The approach uses ‘neuro-computational’ models that are based on linguistic and psycholinguistic theories. These models quantify how a specific computation, such as identifying a syntactic constituent, might be carried out by a neural circuit word-by-word. Model predictions are tested for their statistical fit with measured brain data. By comparing the fit of the models to electrophysiological and hemodynamic data we can tease out the spatio-temporal dynamics of specific aspects of structure-building.

Jonathan Brennan received his Ph.D. in Linguistics from New York University in 2010. After completing post-doctoral research at the Children’s Hospital of Philadelphia and the Neuroscience of Language Laboratory of NYU Abu Dhabi, he joined the faculty at the University of Michigan in 2012 as an Assistant Professor of Linguistics and Psychology. He was promoted to Associate Professor in 2019.

As director of the Computational Neurolinguistics Laboratory at Michigan, Dr. Brennan is one of the pioneers in the study of language comprehension using naturalistic stimuli, such as audiobooks. The naturalistic approach is made possible by the use of rigorous and explicit computational models that specify how different linguistic representations and computations are deployed word-by-word. This work has contributed importantly to our understanding of how syntactic structure is built and used by the brain during comprehension, and to our understanding of predictive processing in children with developmental disorders who may have difficulty completing standard laboratory tasks. Dr. Brennan combines EEG, MEG, and fMRI to obtain neural signals for computational modelling and has brought together a remarkably interdisciplinary group of neuroscientists, linguists, psychologists and computer scientists as collaborators. Dr. Brennan’s research is funded by the National Science Foundation. Though early in his career, Dr. Brennan has become a sought after voice for linguistically informed cognitive neuroscience of language, with numerous invited presentations and publications aimed at making neurobiological methods accessible for linguists and linguistics accessible for neuroscientists.

Producing words involves not only preparation and execution of an articulatory programme, but also the access of conceptual and lexical information in long-term memory, as well as controlled processes for selection and monitoring. In this talk, I will present how I have been studying language production in relation to the domains of memory and executive functioning mainly using electrophysiology, as this technique provides a characterisation of neuronal activity at the resolution necessary to understand language processes as they occur. I will also show how this approach has allowed me to study how the brain reorganises following disruptions of normal functioning.

In her current role as an associate principal investigator, Dr. Piai pursues fundamental and applied research on the neurobiological basis of language in healthy and impaired adults of different etiologies. A common theme in her intuitive, creative, and highly successful investigations is the linking of language, memory, and executive functioning, through uncovering shared neurobiological mechanisms. Electrophysiology forms the core of her interdisciplinary research program, which she combines with behavioral measures, non-invasive brain stimulation, lesion-symptom models, and computational modeling. This multimethods approach has resulted in great theoretical advances as illustrated in one of her influential studies published in PNAS that aimed at understanding the neurobiological basis of lexical-semantic processing using intracranial electrophysiology. She has already published no fewer than 39 peer-reviewed papers in top journals, obtained 3 substantial grants to fund her research, and has established herself as a rising star in the neuropsychology of language.